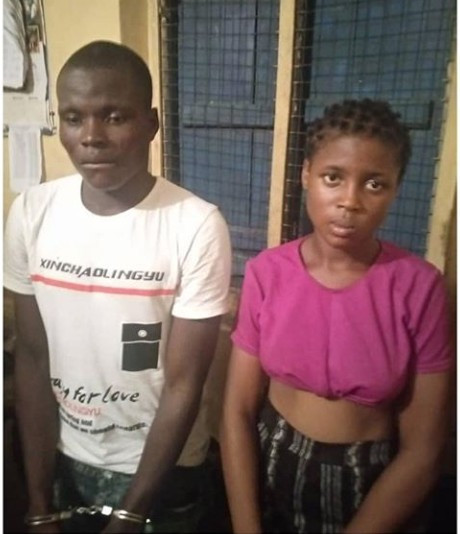 17-year-old girl faked her kidnap with her BF, demanded N500K as a ransom

A underage girl identified as Seun Adekunle faked her own kidnap to demand money from her family.

Seun Adekunle is just 17-years-old with a boyfriend who is 25-years-old. Seun Adekunle found a way to convince the boyfriend to help her dupe her parents/family by faking her own kidnap.

Seun Adekunle went into hiding with her BF, Basit Olasunkanmi for days and then called home with his BF behaving like a real kidnapper to demand N500,000 as ransom.

Seun Adekunle and Basit Olasunkanmi reside with their family in Ogun State and according to the state police spokesperson, Abimbola Oyeyemi, both of them have been taken into custody by the state police after the case was reported on Thursday by Seun mom, Mrs. Bukky Adekunle.

She reported that her child has been missing since on Monday, 1st of June, 2020.

With an investigation that was carried out to look into the incident, the police found out that the young girl was lured into the act by her BF, Olasunkanmi.

It all happened when Seun’s mother sent her on an errand but she never returned, meanwhile she has gone into hiding with her BF as planned. Two days later, the mother of the young girl got an anonymous call that her child has been kidnapped and the only way he can release her child is by paying the sum of N500,000 as a ransom to release her.

The police spokesman said Basit told her that;

“She also said the caller also warned her not to make a mistake of reporting to the police if she still needed her daughter,”

But she called the police attention to it after the day she received the anonymous call and with immediate effect, the DPO of Enugada Division, SP Baba Hamzat, ordered his detectives on a technical and intelligence-based investigation, leading them to the hideout, where they were apprehended.

“Preliminary investigation revealed that the boyfriend, a butcher was the one who brainwashed the girl and lured her into the plan because he needed money,” Oyeyemi said.

The case will be transferred to the state CIID investigations on the orders of the Commissioner of Police, Kenneth Ebrimson, for further investigation. Are you age 65 and above or know someone between those ages? Here is a message from Prof Akin Abayomi

“Tuface accused me of sle*p!ng with his wife and sent guys to beat me up, it’s nothing funny”