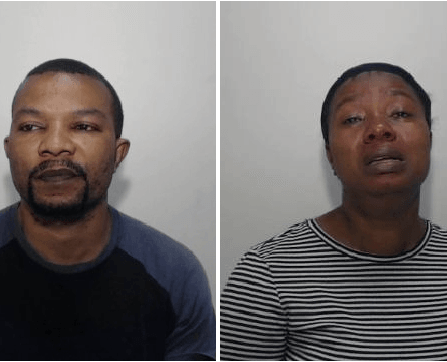 A man and his wife have been sentenced to 19-years-imprisonment in the U.K for sexually abusing a little girl

A man identified as Shola Ogundare, 49-years-old and his wife, Olwafunmilayo Emmanuel, 35-years-old has been sentenced to 19 years imprisonment in total.

Shola Ogundare and his wife were jailed for sexually and physically abusing a little girl and a boy. The case was reported to the police in 2018 which opened an investigation on them.

The investigation concluded that the couples who live in Rochdale, U.K have been constantly abusing the girl alongside another young boy.

Shola Ogundare and his wife, Oluwafunmilayo Emmanuel were both arrested and taken in for questioning by the police. They pleaded not guilty to the charges levied against them.

After a week of trial at the Manchester Minshull Street Crown Court, the jury found the couples guilty of their crimes and therefore sentenced them to prison.

While the wife, Oluwafunmilayo was sentenced to 4-years-imprisonment for participating in the crime and was guilty of four counts of cruelty to a young person under the age of 16.

“First and foremost I would like to commend the victims for their strength in seeking help and disclosing what had happened to them. Both children have demonstrated incredible courage throughout our investigation and this trial, especially considering their age.

“Abuse of this kind often has a long-lasting impact on victims but I sincerely hope that they can move forward with their lives – free from the fear of being abused.

“Ogundare subjected these children to a prolonged campaign of abuse. Under the pretence of punishment, he sexually abused one of the victims to satisfy his most repulsive desires. Throughout this investigation, he has shown no remorse and the things he has said to try to evade justice have been beyond comprehension.

“Emmanuel also subjected the children to physical abuse and has also shown no remorse. She has repeatedly defended Ogundare and tried to discredit the victims.

“I hope today’s result sends a clear message to members of the public and offenders alike that police officers will do everything in their power to see justice done.” says Detective Constable Russell Clarke, of GMP’s Rochdale district.