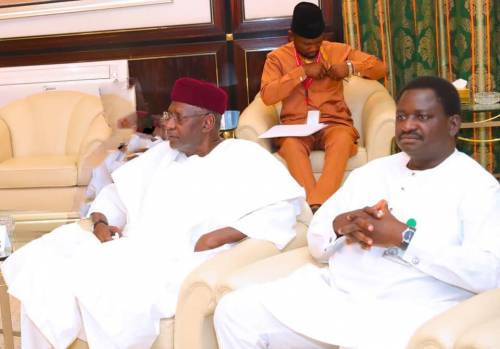 Special Adviser to President Muhammadu Buhari on Media and Publicity, Femi Adesina, has recounted how late Chief of Staff, Abba Kyari appeared to him in a dream before his death was announced.

According to the him, Abba Kyari appeared in the dream in an odd outfit and a friend, Mallam Garba Deen Mohammed, told him the interpretation of the dream that the late CoS came to tell him goodbye.

“I’m not much of a dreamer. At least, not dreams with significance. Dreams come from a multitude of businesses, as the Good Book says, so if a man drinks a bowl of garri before going to bed, and he dreams of swimming in a pond or river, he actually started swimming right from inside that bowl of garri.

“On Thursday night inward Friday, I dreamt. The President and myself were in a corridor in the Presidential Villa, and he was talking with me. Suddenly, by my right, I saw a figure waiting for me to finish with the President.

“It was Mallam Abba, clad in his usual white native attire, with the trademark red cap. But this time, there was no flowing Agbada, which I found rather odd.

“He never (or rarely) appeared without the flowing robe. He was heavily bearded, another surprise, and the beard was all white. I rounded off discussion with the President, and yielded space for the Chief.

“I made nothing of the dream, but after he died, I shared my experience with my friend, Mallam Garba Deen Mohammed.

“‘He came to say goodbye to you, and you didn’t know it,’ my friend said. I didn’t know till then that Garba Deen had the uncommon gift of interpretation of dreams. Well, I now know where to go the next time I dream.

“On Friday, April 17, I uncharacteristically went to bed after listening to the 8 p.m news. And off I went, for “He giveth his beloved sleep.” No dream, no kakiri kakiri (wandering) in my sleep. Till my phone fetched me from a far distance, out of that deep sleep. It was 12. 05 a.m.

“At the other end of the line was a senior aide of the President. He told me he was there with two other very prominent personalities, whom he named. Then he dropped the bomb.

“’Mallam Abba is dead, and we need you to issue a statement informing the public.’

“I sprang from the bed, with my head almost touching the ceiling. Sleep fled completely from my eyes. Abba Kyari dead? How? When? Where? But he promised us he would soon be back at his desk. This was sad, sad, sad….”

Abba Kyari who tested positive for Coronavirus few weeks ago, gave up to ghost in Lagos on Friday April 17. He was buried on Saturday April 18, in a ceremony attended by family, friends and loved ones who came to pay their last respect.

COVID-19: Buhari's appointment is an error, he can barely manage himself – Fani-Kayode tells ECOWAS

The guy who allegedly landed in trouble with Actor, Charles Okocha after taking his daughter out, speaks (Video)

Reality TV star, Erica Nlewedim, reacts after some people ‘unfollowed’ her IG account when she hit the 2 million mark