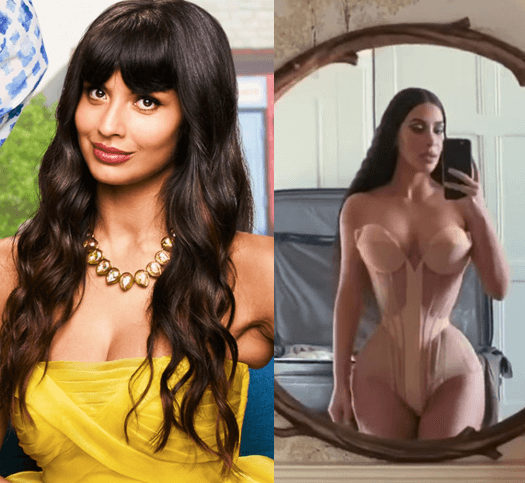 Actress Jameela Jamil condemns Kim Kardashian’s on her use of Corset, saying it is unhealthy

Popular Actress and activist, Jameela Jamil has always criticized the Kardashian family because of their beauty products, saying their products ”promote things that influence women to aspire to unhealthy standards of beauty.”

Kim Kardashian who recently shared a controversial video of her where she tightened her waist unnaturally through the use of a very-tight corset which made people tag Jameela to the video asking her to address it.

Jameela took to her IG page to actually address it by sharing a screenshot of Kim facing the mirror speaking out against unrealistic beauty standards that are reinforced and perpetuated by the patriarchy.

“I’ve received over 1000 DMs asking me to address this. The reason I didn’t jump on it immediately isn’t because I don’t think the post was damaging and disappointing. I do.
It’s because the fact that you’re all messaging me about it, shows my work is done. I havent been trying to cancel Kim K. I was always trying to arm YOU with the knowledge to recognize for YOURSELVES that this is a bullshit expectation of women, developed by the patriarchy. If YOU know that it’s problematic, reductive and irresponsible for her to perpetuate such a heavily impossible beauty standard to her impressionable fans… then you’re empowered and conscious and don’t need me.

Jada Pollock, Wizkid’s babymama, reacts after the singer declares his intention to marry during a music tour