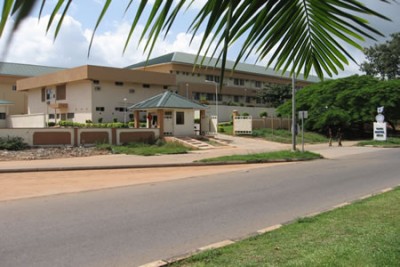 Baby falls and die from a General Hospital in Abuja

A baby has been reported dead after falling from a hospital in Abuja. The baby who is just 3 month-old fell from the first floor of Garki general hospital on Sunday.

A security man at the hospital said the mother of the child and two other people were going into an emergency room when it happened. According to him, he said;

“A woman along with two others were on the top floor, rushing to the emergency ward, when the baby she was carrying, slipped from her grip and fell to the ground floor. The baby’s neck got broken in the process and died.”

The Medical Director of the hospital, Dr. Adamu Onu has not given any update on the matter because patients were entitled to their privacy, he said;

“An incident happened in the hospital but it is not something I will like to divulge for the patient confidentiality reasons. I cannot go beyond what I am telling you at the moment. I cannot say anything beyond what I have said.”

The matter has not been reported to the police because the Police Public Relations Officer, FCT Command, Anjuguri Manza said there is no case of such incident on their table.

“I don’t think this case has been reported to the police. Ask the hospital if they reported the matter to the nearest police station,” Manza said.

FGN vs Naira Maley: Naira Maley's fate for holding a concert to be decided

Trend: Here is why #Woodberry is trending