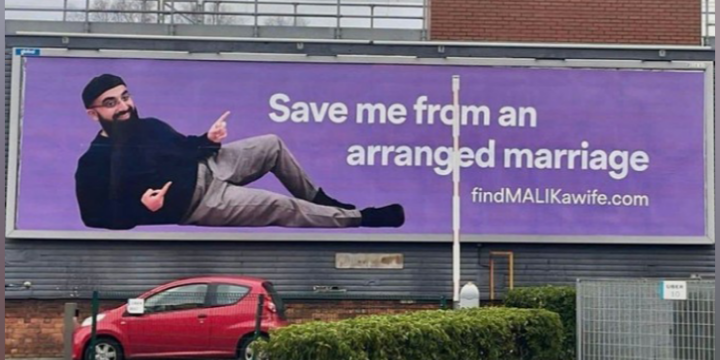 A young man identified as Mohammad Malik who is just 29-years-old had put up a billboard post asking to be saved from an arranged marriage that is going to be organized by his family. He took it upon himself to get his own wife, hence setting up a billboard in London and Birmingham in England.

Doing this, Mohammad Malik had reportedly received more than a thousand suitor applicants, Mohammad Malik can be seen lying across big billboards in London and Birmingham, directing suitors to his website, Findmalikawife.com. When you visit his page, a video of him appears, and he says:

“Hi, I’m Malik. You may have seen my face on a billboard somewhere. I’m 29, live in la vida London. I’m an entrepreneur and a foodie and I’m religious. I am looking for someone who is working on her deen [Arabic meaning religion]. I am open to any ethnicity but come from a loud Punjabi family, so the banter has to be 100. if you’re interested, fill out the form and check out my details.”

In an interview with BBC Asia, he had explained the reason behind having a billboard advert asking for help to avoid getting setup to marry by his family. He said;

“I just haven’t found the right girl yet. It’s tough out there. I had to get a billboard to get seen. “My ideal partner would be a Muslim woman in her 20s, who’s striving to better her deen. “I’m an only child and look after my mom and dad. If this is a deal-breaker I don’t think it’ll work out.” ”