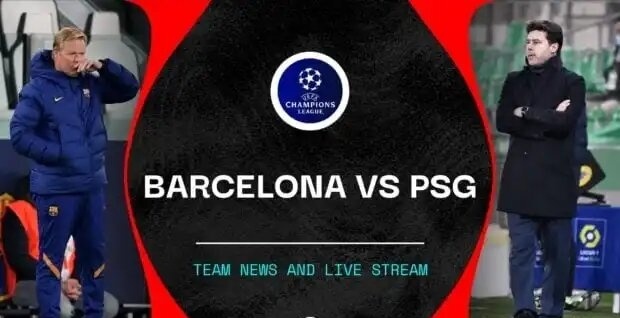 FC Barcelona clash with French league leaders, Paris Saint-Germain in the last 16 of the Champions League on Tuesday night after finishing the Group G behind Juventus as they lost their final group game against them.

Recall that Barca lost 3-0 at home to the Old Lady — their first defeat in 39 Champions League home games — after defeating them in Turin and also picking up a pair of wins against both Ferencvárosi and Dynamo Kyiv.

PSG booked their place in the knockout stages with three successive wins after a not-so-good start in the group stage. Then led by Thomas Tuchel, the Parisians recorded victories over RB Leipzig and İstanbul Başakşehir either side of an important win at Old Trafford.

If the Parisians are to qualify for the next round then they will of course need to stop Lionel Messi from having a stellar performance, an unenvious task for any opposition manager, especially when you consider his form in this competition, which could reach new heights if the Argentine superstar is in the mood.

"All predators stay off" - Nollywood actor, Ninalowo warns as he shares new photos with his 15-year old daughter

#BBNaija: “I’m sad because no guy likes me in the house” -Saskay (See reactions)