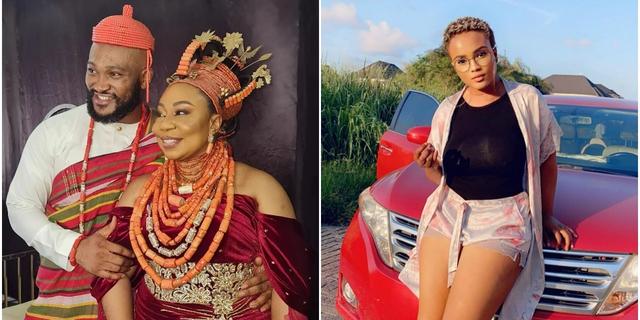 Blossom Chukwujekwu’s estranged wife, Maureen Esisi, has announced that she is still legally married to him because they haven’t divorced yet, despite the actor’s recent marriage to one Ehinome, a Pastor at Christ Embassy church.

READ ALSO: “E resemble you abi e no resemble you?” – Basketmouth blows hot after being compared with a funny looking dog

Naijanews360 recalls that Maureen Esisi and Blossom Chukwujekwu divorced a few years ago, and many assumed that they had finished their divorce procedure, especially since the actor wedded over the weekend, only for Maureen Esisi to say otherwise minutes later.

Blossom Chukwujekwu is still legally married to Maureen Esisi because she hasn’t been served with divorce papers, which means the actor is legally wedded to his second wife, clergywoman Ehinome.

Since Maureen Esisi claims she didn’t feel anything watching him married again, we hope she doesn’t cause him any trouble when he finally serves her with divorce papers so they can both live happily ever after.

READ ALSO: Club owner, Obi Cubana reacts to the report of lady whose partner was shot by Burna Boy escort

I will rather sell my nudes and videos to survive than beg online – Tribal mark model, Adetutu says