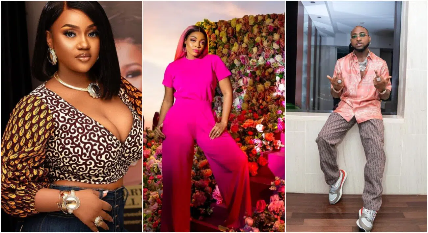 This comes amid the former couple’s relationship issues, and they’ve also unfollowed each other on Instagram, a photo and video-sharing service.

Chioma has remained silent on social media since reports of marital problems arose a few weeks after she was spotted in a London bar.

Chioma was last seen on Facebook five days ago, and neither of them had written anything to celebrate Davido’s sister Sharon’s birthday.

Unlike Chioma, who came to social media in 2021 to honor Sharon despite the rough status of her relationship with Davido, Amanda and Sophia Momodu did the same.

No wonder chioma no wish davido sister happy birthday yesterday this movie go long sha am here for it.

‘I’ve been a baby girl all my life’ - Nollywood Actress, Anita Joseph says as she shares her ssxy throwback photo

“As for your Halima Abubakar, you know you are sick right ?” Bobrisky blast and warn Actress, Halima

“I will end anyone who defiles my 14 year old daughter” – Actor, Bolanle Ninalowo vows