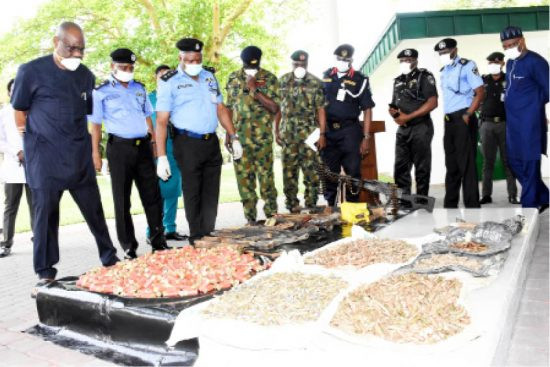 Governor Nyesom Wike has said that criminals terrorising some parts of Rivers State and making the state unsafe have a hideout and operational base in Anambra state.

The Rivers State Governor revealed this while inspecting large caches of arms being displayed at the Government House, Port Harcourt by the state Commissioner of Police, Mustapha Dandaura.

Wike said the police got information from a credible source revealing that some of the criminals who rob and terrorize residents of the state, retreated to Anambra State to take cover after security operatives raided their hideout.

“We are talking about a pandemic that is ravaging the world and some criminals still find their way to make the state unsafe. Some of these criminals that terrorise the state come in from Anambra state. They operate in the state and retreat back to Anambra state to take cover. The capacity of the arms recovered from the criminal hideout is capable of overrunning the state.

“Imagine a situation where these arms are unleashed on the state. These arms are buried on the ground by these criminals and dug out anytime they want to use it for operation.”

Rivers State Commissioner of Police, Mustapha Dandaura who also spoke to newsmen said items recovered from the criminals are  1 GPMG, 2 SMG, 5 pump action rifles, 1,111 round of 9mm live ammunition among others from the kidnappers’ den in Ogu-bolo axis of the state.

He said one of the suspects was arrested after men of the tactical unit of the command acted on credible information. The suspect led the team of police officers to the camp where the arms were recovered.

IMF- Nigeria will fall into recession for 30 years

He doesn’t even know our son – Ubi Franklin blasted by his South African baby mama, Nicola Siyo for wishing her a happy birthday on Instagram