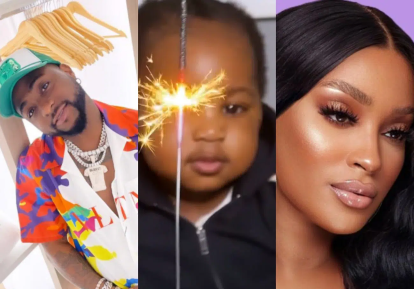 According to a reliable source, it has been concluded that Davido is the father of popular UK bases make up artist, Larissa London son, Dawson.

According to a post on Glam Squad Magazine, a DNA 🧬 test was carried out just last month to truly confirm if Davido is Dawson’s father, and the test results came back 100% positive matching DNA.

Remember when the news first broke out, the internet was flooded with Chioma trending, well, it’s a reality now.

“DNA test was conducted last month and it came out 100% positive. Davido is Dawson’s biological father.” A source who is close to the family revealed to Glam Squad Magazine.

“Look at the way Nini is staring at Saga, It appears he has finally won her over”- Fans react as a loved-up video of Nini and Saga surface online (Video)

This has made Dawson an Adeleke, Davido’s second son after Ifeanyi Adeleke, Chioma’s son.

The HMs are back one more time in the house [Video]

Change your guard’s shoes — Followers advice Kiddwaya in his comment section, after he posted some photos (Photos)