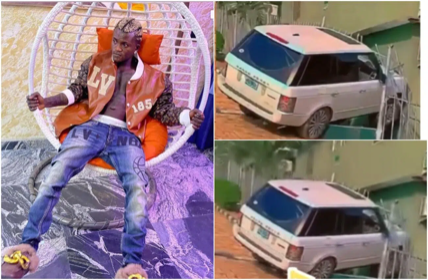 Habeeb Okikiola, also known as Portable, is apologizing to his detractors after surviving an automobile accident on Tuesday, March 29th.

Portable crashed his freshly acquired Range Rover SUV on his route to an unspecified location yesterday, according to Kemi Filani. The alleged “high” singer crashed his car into a structure.

A few hours later, he took to Instagram to thank God for his survival and to inform his admirers about the wonderful condition of his car.

Actress, Laide Bakare dazzles as she shuts down Lekki for her house warming party (Video)

“Does anyone need a Nanny? Not Franklin tho” – Singer, Timaya writes in new post, shares screenshot of Davido describing him as ‘Our Nanny’

#BBNaija: Maria grinding and letting Michael smack her a$$ 🍑 (Video)