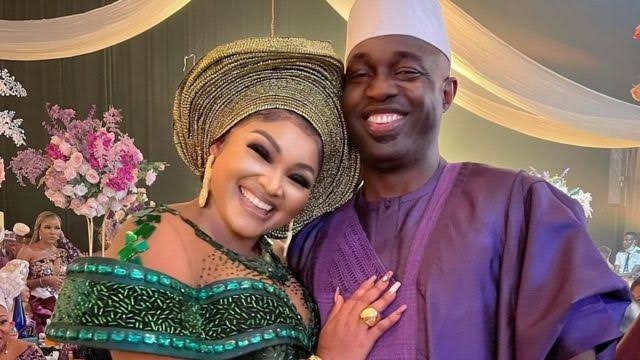 Mercy Aigbe, a well-known Nollywood actress, is believed to have left her new husband’s home before Adekaz’s first wife who is based oversea arrives in Nigeria.

This comes just months after Mercy Aigbe married her husband, Kazeem Adeoti, a.k.a. Adekaz, who allegedly claimed to be exploiting the marriage to further his political career.

According to a controversial blogger, the actress was forced to leave the house because her husband’s first wife plans to come from abroad to claim the home she and her husband built together.

Information reaching Vawulence headquarters be say Aunty Mercy Aigbe don go back to her house for now oo as the first wife and the husband gather build the house together ni before Aunty Carry her two left legs enter their marriage dabaru am oo and as it is matter still Dey ontop the house, the wife Na abroad based so as Aunty Dey come house Den Dey enjoy she don think say the first wife no go come 9ja come claim her property, you see why I say believe all these yeyebrities at your own risk.

Close source also reveals say the motor wey Aunty claim say Na brand give am, Na Adekaz handiwork as that one really needed to convince Aunty say him ready😂😂😂😂😂 them come Dey lie ontop brand🚶‍♂️🚶‍♂️🚶‍♂️as it is now the matter go soon turn yam pepper scatter scatter ooo, close source to the family also reveals that the plan was to use Mercy Aigbe accomplish his political career that he once confided in one of his friends about it, mercy on the other hand sef wan upgrade her puna to politics levels, so Na who wan d!e jam who go k!ll am😂😂😂😂, the two of them fit each other, make una stand well well oo because if bottles begin Dey fly make e no go meet una ooo. I come in peace.”

"If you don't want me to expose your family, don't expose mine"- JJC SKILLZ baby mama says as she reveals the hidden face of their Twin (Photo)

Nigerian Idol is back in 2022; Simi, D’banj and Obi Asika revealed as judges