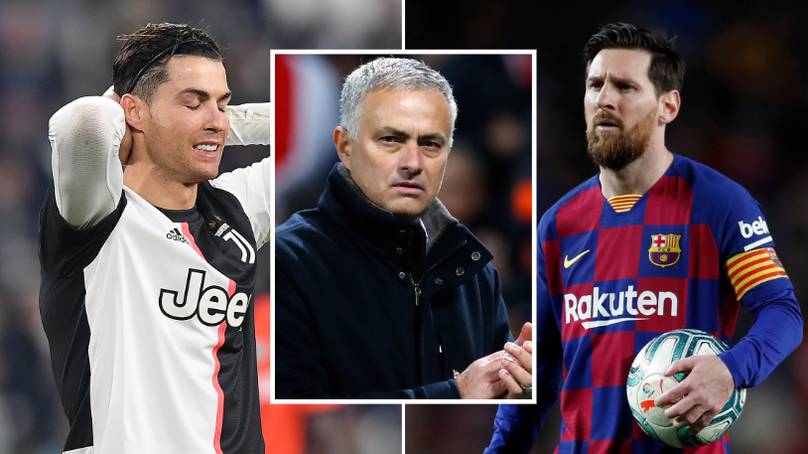 Most times, the question of who is the greatest footballer of all time always come up which leads to the debate between five time Ballon d’Or winners Ronaldo or Messi but for Jose Mourinho, it’s none of them.

The former Manchester United manager was asked by LiveScore who the greatest footballer of all time was and he revealed it was Ronaldo Nazario, who he worked with at Barcelona, saying, “Ronaldo, El Fenomeno. Cristiano Ronaldo and Leo Messi have had longer careers, they have remained at the top every day for 15 years.

“However, if we are talking strictly about talent and skill, nobody surpasses Ronaldo [Nazario]. When he was at Barcelona with Bobby Robson, I realised that he was the best player I’d ever seen take to the field.

“Injuries killed a career that could have been even more incredible, but the talent that that 19-year-old boy had was something incredible.”

Ronaldo only played for Barcelona in the 1996/97 season, having previously played two years for PSV, and scored an incredible 34 goals in 37 games.

Having broken the world record fee, with a transfer fee of £13.2 million, Barca sold him to Inter Milan a year later when contract negotiations broke down for another world record fee of £19.5 million.

By 1997 and the age of just 21 the Brazilian had won the FIFA World Player of the Year award twice and would go on to win it a third time in 2002.

Ronaldo won the Golden Ball at the 1998 World Cup but the mystery surrounding his near absence at the final, when he was out of the team and then back in, stole all the headlines as Brazil lost to hosts France.

He then missed a great part of three seasons with several knee injuries for Inter Milan which were the start of the problems that meant he never quite lived up to the potential he had, despite still having an incredible career.

The Brazilian went on to score 352 goals in 518 appearances in all competitions in his club career and without injuries he could performed more.

Of course Messi and Cristiano Ronaldo have since taken the game to a whole new level with their goal records but Mourinho thinks El Fenomeno is still one of the best of all time.

WHERE ARE GENERAL BUHARI AND PASTOR OSINBAJO?” RENO OMOKRI ASKS

"Where are General Buhari and Pastor Osinbajo?" Reno Omokri asks

#BBNaija: ‘Why I like Bryan despite his attitude towards me’ – Daniella express herself (Video)