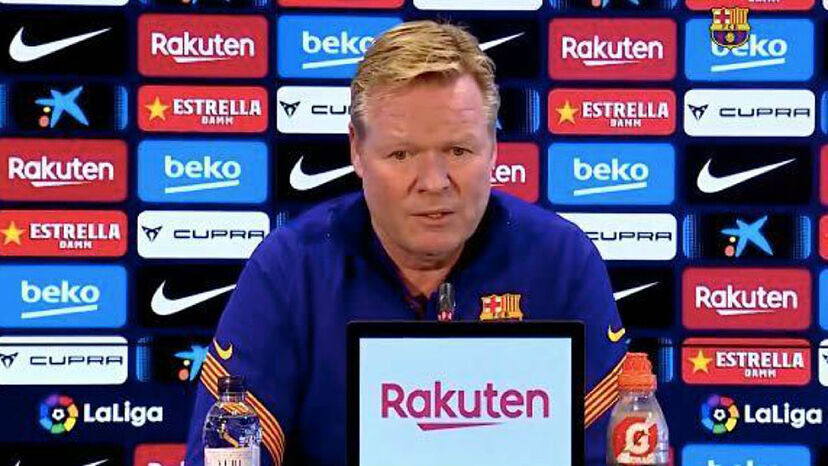 Barcelona coach, Ronald Koeman is still hopeful about lifting the 2020/2021 season league trophy 🏆 of La Liga Santander after suffering a defeat to Granada (1-2).

The Spanish giant is 3rd on the league table accumulating a total of 71 points as Real Madrid and a difference of two point behind Atletico Madrid.

He feels his club could still win the league if they win the remaining 5 matches left.

He said “I am convinced that if we win all five games we will be champions” in an interview with him ahead his clash with Valencia.

“[Granada defeat] was a disappointment because it was a missed opportunity, but there is no time to be sad.

“We are still in the fight to win LaLiga. There are things to improve, we have spoken and I think the team is well prepared.”

During the match with Granada on Thursday, Ronald koeman picked up a red card after saying something he wasn’t suppose to say to the fourth official which has now landed him an absence from the Valencia match.

“I don’t know. First I have to know what is possible. I will speak with Carlos Naval to see what I can do.”

“We will speak and we will look for the best solution, if it is possible to have contact.” he said when being asked how he would go about it without him on the pitch in a very important match.

As the interview goes on, he was asked about the rumors flying around saying some of his players are not in their best physical form, he replied;

“I do not agree that we are not in good shape,” he said.

“I think that in some games we have put ourselves ahead we have not killed off the game.

“There are many more games in which the team was better in the final stretch, than the opposite.”

“It is a strong championship, with very good teams. There are four teams fighting for LaLiga,” Koeman noted.

“There are three points between them. If you are not doing well, stuck, or if you lack some things, you pay dearly. That is the beauty of this season.

“There is no team superior to the rest. If you are not doing well, you lose points. That shows that it is a very strong championship “

"Davido motivated me to return to Nigeria, he told me I was going to be a huge star" – Singer, Teni reveals

Mans sprays money on bridesmaid b0*bs instead of bride 😂 (video)