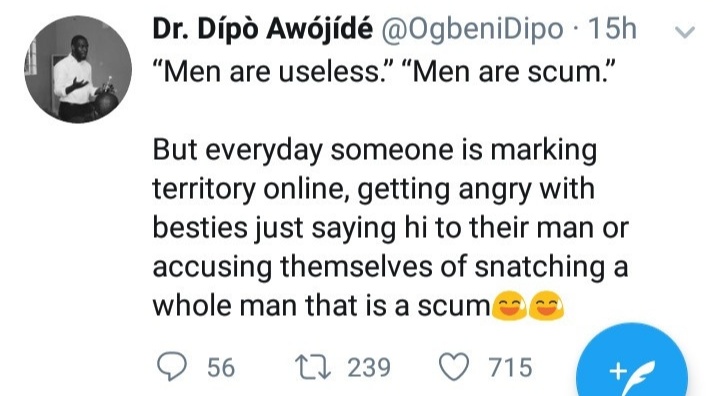 Personal Development Coach, Dipo Awojide, popularly known as Ogbeni Dipo, has expressed his curiousity on why women claim men are useless, yet spend most of their time fighting over men.

He took to Twitter to state that women are always the ones angrily tweeting “leave my man” but men usually follow suit. Yet, women are quick to say men are useless and scum.

““Men are useless.” “Men are scum.” But everyday someone is marking territory online, getting angry with besties just saying hi to their man or accusing them selves of snatching a whole man that is a scum.

“You see, Nigerian men are not useless after all. Because if we were, no woman will be threatening to pour acid on another woman over a useless man. Men are not scum too. Scum has no gender.”

All the social media accounts bearing Professor Ibrahim Gambari, the Chief of Staff to President are fake - Bashir Ahmad

#BBNaija: “you will fall for me” says Angel as General Pere reveals the only girl in the house he fell for without regrets (Watch)