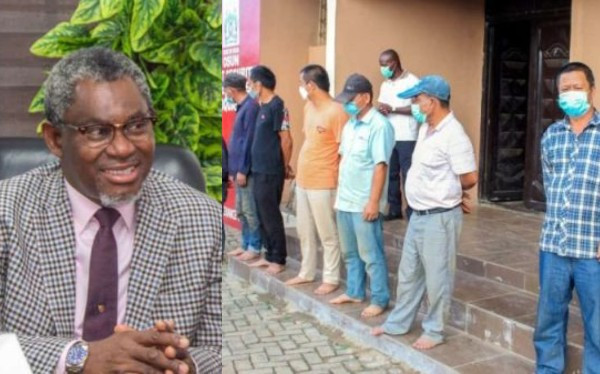 Olamilekan Adegbite who is the minister of mines and steel development has said there are some influential people who are mounting pressure on the Federal Government to free the Chinese men who were arrested for the illegal mining of Gold in Osun state.

The Chinese men were arrested just a few days ago in the state and according to Mr. Olamilekan, he said there are some soldiers who are helping them in the illegal mining of the Gold. The Minister told newsmen that;

“Nigerians in high positions of authority [are behind them]. The Chinese are the main culprits in the illegal mining activities and we are going to meet with the Chinese embassy. We are going to present all the facts to them so that it will not appear as if we are targeting them unfairly.

“These godfathers were operating with impunity before, but they are now scared because the arrested illegal miners are naming names but they (godfathers) are denying. The law is on our side and we must prosecute these people to serve as a deterrent.”

Actor, Charles Okocha caught his daughter inside a guy’s car, took his daughter, beat and broke the guy’s car (Video)