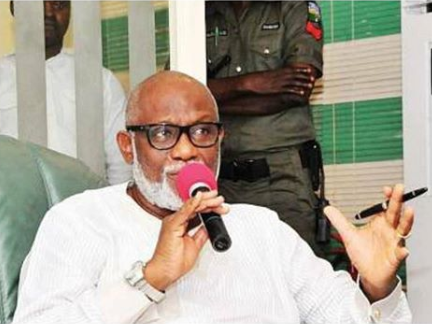 Governor Rotimi Akeredolu of Ondo state has recalled his decision to allow churches in the state gather on Sunday April 12th for Easter services.

Earlier in the week, the governor waved the ban on social gatherings and permitted churches to hold Easter servives only if they follow strictly the precautionary measures against the spread of coronavirus.

Following the huge criticism his decision caused, the Governor announced this morning via his Twitter handle that he has heard the concerns of everyone and has directed that the services would not hold.

I’ve heard you all and your concerns on the need to #LockDownOndo. I have just concluded a meeting with CAN and we have resolved that the services will not hold again. Thanks for your concerns. Stay blessed and Happy Easter to all.

Also read a statement from the state Commissioner for Information announcing the cancellation of the services.

”The State Government notes with deep concern the second index case. This development has once again, reinforced the need to deepen our collective efforts to combat the COVID-19 pandemic.

The Ondo State COVID-19 Response Team has reported that the second index case having travelled from Lagos to Ondo State must give the Government greater concern to avoid community transmission.

Against the backdrop of the above, the Ondo State Government has directed the cancellation of the special concession granted Churches across the State to celebrate the Easter Sunday/Service. This decision was taken after due consultations with the leadership of the Christain Association of Nigeria(CAN).

All measures and steps taken in respect of COVID-19 still remain in force. In particular, Government has taken further steps to effectively man the boundaries in the light of reported cases of compromise and breach of the directive to close all inter-state entry points into Ondo State.”

#BBNaija: “I’m sad because no guy likes me in the house” -Saskay (See reactions)