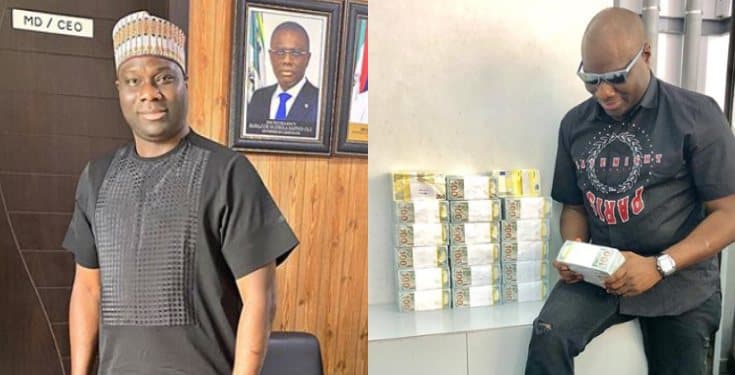 Ismaila Mustapha, popularly known as Mompha, an embattled Nigerian businessman based in Dubai, has spoken out hours after the EFCC declared him wanted.

READ ALSO: ‘I’m not your type, your huge amount will never get me’ –Actress Chiege blast man who wants to have 3-som with her and his wife

According to Kemi Filani, the anti-graft agency has charged Mompha and his company, Ismalob Global Investment Ltd, with fraud.

On January 12, the EFCC charged the socialite and his company with N6 billion fraud.

He was remanded in EFCC custody but later granted bail of N200 million, which he could not meet. The commission charged the socialite with defying a court order by traveling to Dubai with a new passport on June 10.

A Lagos court revoked his bail on June 22 due to his absence from trial. The Economic and Financial Crimes Commission, or EFCC, has declared Mompha wanted once more. On Wednesday, the anti-corruption agency announced this via its Twitter account.

“Wanted by the EFCC: Ismaila Mustapha. Anyone with useful information as to his whereabouts should contact the EFCC or the nearest police station”

It had urged Nigerians with information about Mompha’s whereabouts to come forward or call the nearest police station.

Mompha revealed that after his arrest and arraignment on the first case at the Federal High Court in Lagos on December 10, 2021, the court gave him judgment and ordered the EFCC to release his wrist watches and other valuables in their custody.

The EFCC, however, was dissatisfied with the court’s decision and came up with another fabricated charge against him.

He revealed that when he went to the commission to retrieve his wristwatch and other belongings, he was arrested and charged.

The EFCC arraigned him before a familiar judge who made bail difficult, and he was detained for two months.

When he was released, he went to see his family and lawyer, and the EFCC lawyer, along with an EFCC operative, used the fact that he went to blackmail him into entering a plea bargain with the EFCC or else he would inform the judge of his travel.

Mompha claimed that the commission demanded N142 million in compensation and that he sign a one-year prison sentence, which he found unacceptable. They then reduced it to N40 million naira and a year in prison.

Mompha’s refusal to sign the plea bargain and play their game prompted the commission to notify the judge that he had traveled and the judge declared him wanted in the absence of concrete evidence.

READ ALSO: #BBNaija: “Everybody dey knaack for this house” – Amaka and Phyna cry out over speedy c*ndom exhaustion rate (Video)

He wrote on IG:

‘MOMPHA WANTED BY THE EFCC’ – THE TRUTH STORY
After my arrest and arraignment on the first case at the federal high court Lagos, on the 10th of December 2021, the court gave me judgment and ordered EFCC to release my wrist watches and other valuables in their custody to me for been unlawfully seized.

Being a bitter agency, the EFCC in dissatisfaction with the judgment of the court on the release of my wristwatches came up with another trumped up charges against me.

On the 10th of January 2022 while I was at there office at Okotie Eboh to retrieve my wristwatches in compliance with the judgment of the court and immediately after collecting my wristwatches, they held me down at their office and charged me to court the following day on the frivolous charges.

READ ALSO: “The land alone is N9.5m” – Nigerian man cries out in pain as his wife vanish after selling his massive building for just N10 million (Video)

I was arraigned before a familiar Judge to the EFCC and in effect I was given a very difficult bail to meet as a result of which I ended up spending over two months in prison custody while making efforts to meet the difficult bail. After several attempts to meet the bail conditions failed, I successfully applied for the bail conditions to be reduced which eventually led to my release.

Upon my release I traveled outside Nigeria to check on the welfare and wellbeing of my family and returned to Nigeria shortly only for the EFCC Corrupt lawyer, Rotimi Oyedepo rather than focus on the establishing his criminal case against me along with the EFCC operative Kaina Garba, chose to capitalize on the fact that I travelled to blackmail me into entering plea bargain with EFCC else he would inform the Judge I travelled and ensure my bail is revoked therefore making me have no choice than to dance to his tune.

I initially refused but after so much blackmail and intimidation by Rotimi Oyedepo, I succumbed and was told to pay N142 million naira to EFCC as compensation and also sign for a one year imprisonment sentence which I was uncomfortable with and they thereafter reduced it to N40 million naira and one year imprisonment.
When it became obvious to EFCC that I wasn’t going to sign the plea bargain and play to their game, they informed the Judge I travelled and the Judge without any concrete evidence and disregard Chomzy and Eloswag reconcile by cuddling after a fight (Video)

Singer BankyW shares some of his experiences as a new dad

BBNaija: The Moment Kiddwaya got jealous when he saw Erica rocking Laycon…LOL (video)