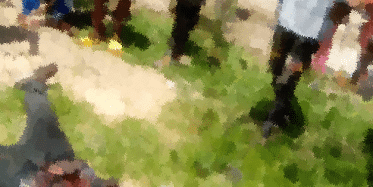 Suspected suicide bomber blows himself up in Ebonyi (photo/Video)

An unknown man who is suspected to be a suicide bomber found himself dead after blowing up himself just near and opposite of the campus 2 of Amaizu/Amangbala primary school in Afikpo local government area of the Ebonyi state.

This incident happened on the 25th of May, 2021. There is a big market in the area which is said to be the biggest market in they local government area.

It seems the middle-ages suicide bomber had want to blew up the market because according to the residents, the man was seen walking up and down the market area.

One of the resident said “first came into a beer parlour and when the people inquired who he was, he left.”

It was also gathered that the bomber 💣 had made effort to enter the school but was stopped by the gateman. It was said that the man wanted to remove his clothes before the bomb blew up.

He was seen laying in his own blood, dead. The state police command nor the state government is yet to react to this development.