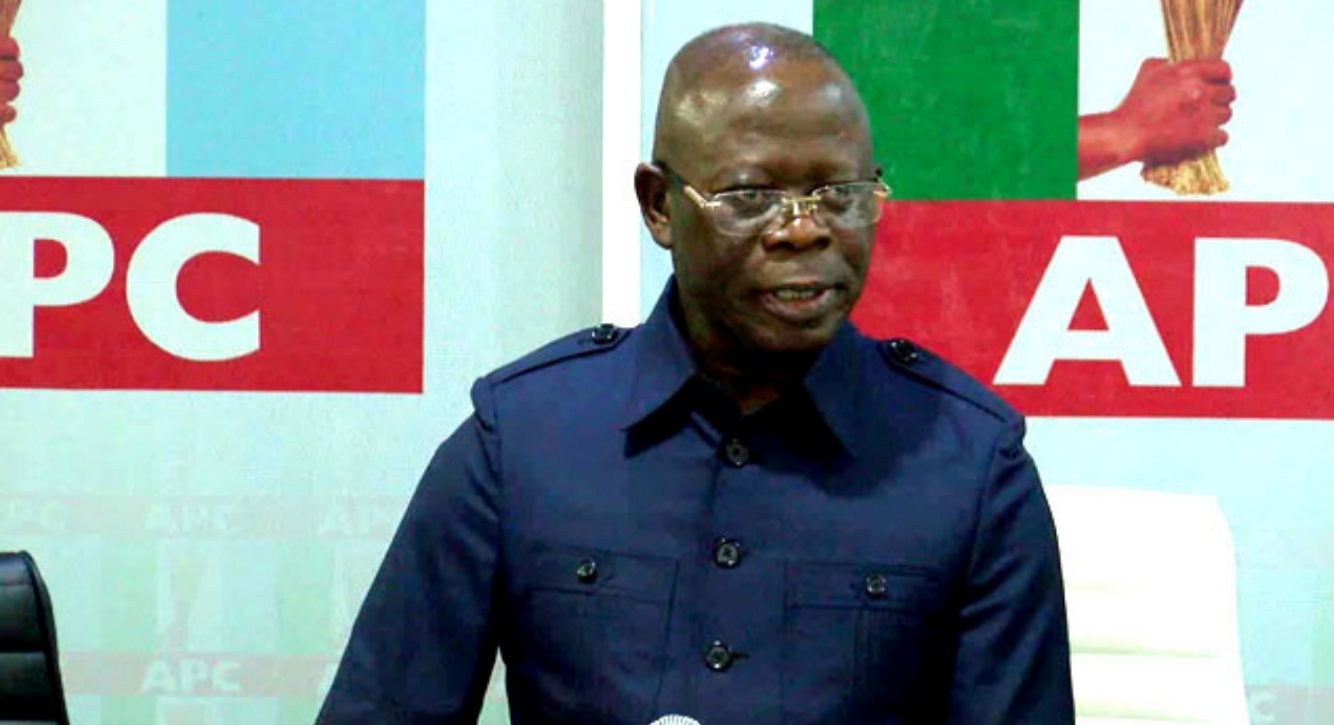 Adams Oshiomhole has said that those plotting against him for his removal from office as the National Chairman of the All Progressives Congress (APC), are doing so because of 2023 elections.

After his meeting with President Muhammadu Buhari at the State House in Abuja on Thursday March 5, the former Edo State Governor told newsmen that those plotting to eject him from office see him as a threat to their plan.

He added that those leading the “anti-Oshiomhole campaign” are weak politicians who cannot boast of winning a seat for councillor not to mention laying claim to a leadership position in the party.

“Those fighting me just feel that if they cannot give me orders, then they must do everything to embarrass my person, but I believe that he who God stands with no man born of a woman can bring him down.

“I can’t say more than that. Those who are parading themselves, holding meetings at night, my prayer to my God is that let them meet at night, what they do at night will be destroyed in the day time. I don’t go for night business I do day business. They know themselves, they know me and I know them.

“It is just unfortunate that if you have out of 100, 90 people are happy with you, who will call and say well done, those 10 who are not happy are the ones that will call news conference to denounce you, they are the ones who will hold midnight meetings in a minister’s house to say how do we bring him down.

“They are the ones who will plot how do we get rid of him because they want to be president in 2023 even when their hold on their state at the moment is doubtful If they were to go for referendum in terms of their approval rating.

“But as for me, I live my life as the Christians say live it as if there will be no tomorrow, on day by day basis. But God will see me through, He knows my heart, He knows my conscience and He knows the wishes of the overall majority of our members and to them I remain ever grateful

“Unfortunately, very few section of our elite want to weaken institutions so that they can control and if you refuse to oblige them, the misuse of your institution then they go for your jugular, that is the only thing. Otherwise I ask you, remember the confusion we had at the last NEC meeting?

“That meeting took place exactly a week or about 10 days after we had won Kogi election, Bayelsa election before the court took it and donated it to somebody else. Yet in the face of this victory, people said Oshiomhole must be removed, precisely because we won more seats.

“But you see whatever you do, those who want to fight you will fight you. But I know that my tenure will be defined by God not by man. And I worry more about what I will be remembered for when I was chairman rather than how long I was chairman. And I am convinced that I have done my very best, mistakes would have been made and I want to see the one person who will say he has never made mistakes”

On the court order obtained against him, Oshiomhole said;

“Just yesterday (Wednesday) morning suddenly I saw in the news that an FCT High Court has suspended me as national chairman. And that one of the persons who went to court was my vice chairmen (Northeast), one Mustapha (Mustapha Salihu APC National Vice Chairman Northeast) and four others. I was taken aback because in the same suit, they joined the APC, the police and the DSS.

“Our lawyers told me that in law when you sue a federal agency, FCT High Court has no jurisdiction to entertain it. Number two, the purported suspension of my person by my ward, first I am going to give you a document to that effect so that you can form your opinion. Number three, I am not an officer of my ward, I am the national chairman of my party, elected at a national convention by over 7,000 delegates, so how could nine persons sit down somewhere and purport that they have removed a national chairman. And the court contrary to all logic, all judicial precedence find comfort in granting an interim interlocutory order to stop me from functioning pending when the matter is determined. In other words, he has given the order without the facts being laid before him and in the process adjourned the case to April 7.

“The calculations are clear that between now and April 7th, my opponents in the system would have had ample time to do all the mischievous plans they have in place to distabilise the APC. Because, some of them have membership of more than one political party.  But happily this afternoon (yesterday), a federal high court that I believe that has jurisdictions on federal issues because the DSS, the police are not state institutions but federal institutions, has given an appropriate order to restrain the so-called suspension that was allegedly imposed on me by my ward in Edo State.

“I thought that I had a duty to brief Mr. President as the overall leader of our party about this development. Incidentally, when I requested for the audience yesterday I wasn’t sure what has happened today will happen. But I had a duty to inform him about the court order. But happily before coming here, the order from a Federal High Court that made nonsense of what the  FCT court purported to have done has already settled the question.

“And I showed to the president the resolutions of my ward even though a ward executive does not have the powers to remove a national chairman, just to say that the document that we have says clearly that my ward passed vote of confidence on me.

“How the court can hold vote of confidence and twist it to mean vote of no confidence, only that judge can explain it to himself. But the good news is that this is not a final court or is it the only court, incidentally it is just the court that didn’t have the jurisdiction even to listen to this matter. And our lawyers so pointed it out but the judge was determined to oblige those who want to distabilise the All Progressives Congress.

“Those behind this plot, the hands you saw which include as you saw yesterday, the Edo State governor and his people jubilating, but that is the irony of life that you will help give birth to a child and the child look for cutlass to want to chop off your neck. It has happened in history, it has happened in this country so I won’t be the only person.”