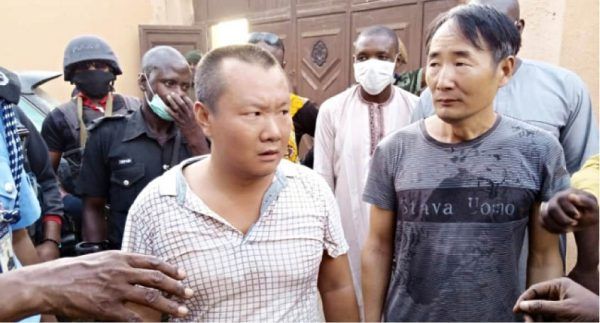 Two Chinese men have been arrested for illegal mining in Kwali, Bukkuyum LGA of Zamfara state despite the order given by FGN to cease all mining activities due to armed banditry and cattle rustling troubles in the state.

Zamfara state police command arrested the two Chinese men after receiving a piece of information that some white foreigners alongside some unknown Nigerians were seen mining in Kwali.

According to a report on DAILY TRUST, Shehu said;

“On the strength of the information, the state Commissioner of Police, Mr. Usman Nagogo, led a special task force team to Kwali mining sites to assess and see things for himself.

The information proved to be credible one as hundreds of miners scattered as soon as they saw the team. Two laborers were however arrested who confirmed the presence of Chinese and Burkinabe among others”

The two Chinese identified as Mr. Wang and Mr. Chun are being interrogated to get more information that could help the course of the investigation.”