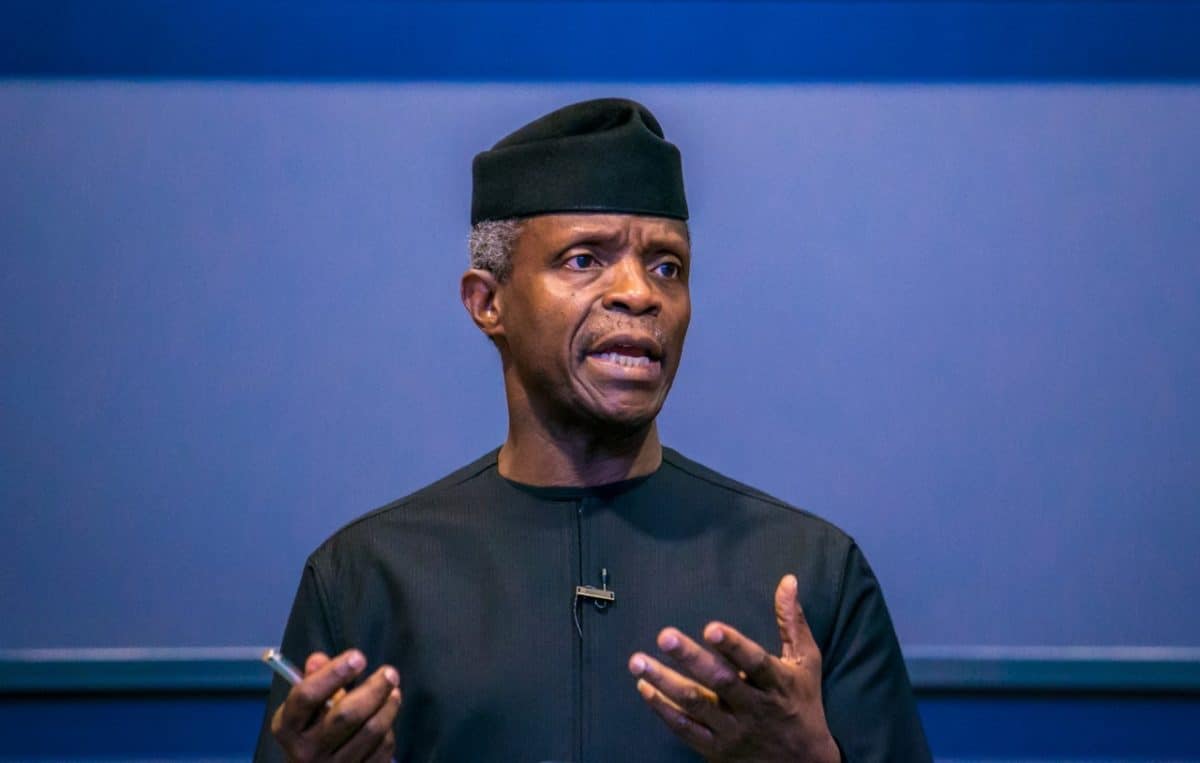 The Vice President of Nigeria, Yemi Osinbajo has come out to address the issue ad mentality of people who blame sexual abuse victims.

The vice president attended the webinar on Anti-Sexual Harassment which was themed “Finding Safe Spaces for Female Students in Nigerian Universities”. The webinar was organized by Obafemi Awolowo University, Ile Ife, and according to the Vice President, he said victims must and should always be seen as victims and not to be blamed.

WE REJECT NOTION THAT SEXUAL HARASSMENT VICTIMS ARE RESPONSIBLE FOR THE ABUSE, SAYS OSINBAJO

*Adds: “offenders should be visited with the strictest possible consequences”

The notion that victims or potential victims of sexual harassment are architects of their fate especially by their attitude, dressing or willingness to be in a compromising place with their violators is wrong and should be resisted in every situation. The victim must always be seen as the victim and not to be blamed.

This was the views of Vice President Yemi Osinbajo, SAN, in his contributions on Wednesday at a webinar on Anti-Sexual Harassment themed “Finding Safe Spaces for Female Students in Nigerian Universities”, organized by the Obafemi Awolowo University, Ile Ife. The event was based on the book authored by notable journalist and former presidential spokesman, Mr Olusegun Adeniyi, titled NAKED ABUSE: SEX FOR GRADES IN AFRICAN UNIVERSITIES.

According to him, “the victim must always be seen as the victim. There cannot be an excuse, especially given the power configuration between students and lecturers, that the victim could have somehow invited the abuse upon themselves. I think it is an important consideration to be made and we must not allow that notion to persist.”

Advocating stricter punishments for rape offenders especially in situations involving lecturers and their female students, Prof. Osinbajo said “there cannot be an excuse especially given the power configuration between students and lecturers that the victim could have somehow invited the abuse upon themselves. I think it is an important consideration to be made and we must not allow that notion to persist.”

Continuing, the Vice President said “there is also the comparison sometimes made between demanding bribes for service and sex for grades. Sometimes people will argue that a bribe is a bribe and there is no reason why the punishment for sex as the currency of the bribe, should be stricter than an ordinary bribe.”

Referring to Adeniyi’s book, Prof. Osinbajo said developing and adhering to a set of ethical codes of conduct for conversations and interactions involving lecturers and students in universities would greatly address the problem.

He said: “to ensure that both faculty and students are sufficiently clear about the issues and rules, there is a need for a code of conduct or ethical guidelines based on best practices in appropriate student/lecturer interactions.

“It is important that these are clearly defined in ethical guidelines that are contained in some documents that people can refer to and see. It is important both for the lecturer and the student that there is some reference to some code of conduct.”

Speaking further on ways of resolving issues around sexual harassment in Nigerian universities, Prof. Osinbajo said the search for answers to creating safe spaces for female students in universities must begin from the question of why is it that such an evidently rampant crime is so under-reported?

According to him, “there are obviously many cases of people who share their anecdotal experiences without necessarily reporting to the authorities. I think the answer is clearly that this low reportability is on account of the fact that many victims do not feel confident that they will get redress, or that they will be treated fairly or that they will not be visited with the same fearful consequences that was the subject of the demand in the first place.

“The fear that they will neither get a sympathetic nor understanding hearing, let alone justice, and that they will end up suffering the same consequences the predator had threatened would occur if they did not submit to their demands. Then there is of course, the shame and stigma that could attend speaking up.”

“I think that in ensuring that we create safe spaces, we must do at least the basics, which is providing the support and resources they need to report abusers. Every institution must make it easy for victims or potential victims to report perpetrators to trusted formal structures or secure channels created specifically for the purpose of resolving such cases,” the Vice President added.

Meanwhile, in another development, Prof. Osinbajo has underscored the synergy between the legislature and the executive in supporting policies and programmes of the administration especially those geared towards boosting the nation’s economic base.

The Vice President stated this on Wednesday at a virtual Citizens’ Dialogue on the Green Imperative Project. The Green Imperative Project is a bilateral initiative between the Federal Government of Nigeria and the Brazilian government to develop Nigeria’s agricultural production base through a mechanization programme that is spread across the 774 Local Government Areas in the country.

BBNaija: ‘What I Will Do When I See Tolanibaj After The Show’ – Vee Reveals

“I got pregnant in SS3 and my church banned me from singing in choir” – Singer, Waje reveals